Related:
Who is the Falcon / Sam Wilson?
SPOILERS - Easter Eggs, Revelations in Cap 2
SPOILERS: What happens to Agents of SHIELD after Cap 2?
Designing MODOK for TV?
Marvels Agent of Shield speculation HUB
Agents of Shield growing Rogue gallery
Will the Overkill Mind be a villain in Agents of Shield?
Will Ward become Wonderman?


For this review I will try to keep Spoilers to a minimum but still expect some Spoilers.  It is hard to review something like this without revealing anything.

Captain America 2 The Winter Soldier is an amazing movie that takes you on a ride that includes the twists and turns of a political thriller with the action of a super hero movie.  It may have the most real world relevance and grittiness than any of the Marvel movies we have seen so far.

If I had to describe it using 2 words I would say Bad Ass. We are also introduced to a variety of new characters.  Top amongst these is the Falcon who is introduced as a simple veteran friend of Captain America but turns out to be so much more.  He is introduced in such a way that you care about him as a man and a hero. Much like Captain America the Falcon oozes integrity and courage in an attempt to do what is right but he does not carry a shield.  Falcon flies using a jet pack with metal wings that could have looked corny but instead look awesome.  Falcon is one of the first African American characters in comic history and it is great to see him brought to life in such an awesome movie.  There are other characters here though.  Robert Redford play the political heavy weight of SHIELD who effectively acts as Nick Fury's boss.  Redford adds a heavy dose of gravitas and seriousness to his role, that adds a degree of depth to this superhero foray.  This movie really is a hybrid of Redford's great spy thriller "Three Days of the Condor" and the Avengers.  Other characters are introduced including Batroc the Leaper, Sharon Carter, Crossbones, and the character that is most likely the clairvoyant on Agents of Shield.  I will not reveal who the Clairvoyant is here but he certainly fits well into the overall story.  Finally, you have the Winter Soldier the assassin who makes a dramatic entrance and keeps coming.  The Winter Soldier is a formidable and ruthless foe who seems to always be a step ahead of the heroes.  He too is not simple and has layers of depth that will keep viewers intrigued throughout the film.  He also has secrets.

One of the biggest surprises in this movie is simply how completely bad ass Captain America is.  He seems to move faster, striking efficiency and ruthlessly.  His fighting style is a mixture of swift cat like moves and backed up with some serious muscle.  This is not the Captain America you saw in Cap 1 or the Avengers.  He genuinely terrifies the bad guys in this movie.  If you don't leave the theater wanting to fling a vibranium shield at a bad guy then you have no soul.  Chris Evans also has more to do from an acting standpoint.  Captain America is no longer in the clear right and wrong world of WW2, in this movie he has doubts and struggle in navigating a complex gray world.  He also struggles with loneliness, and feeling out of place.  In this movie he grows from being a leader of soldiers taking orders to the man making philosophical decisions that change the world. 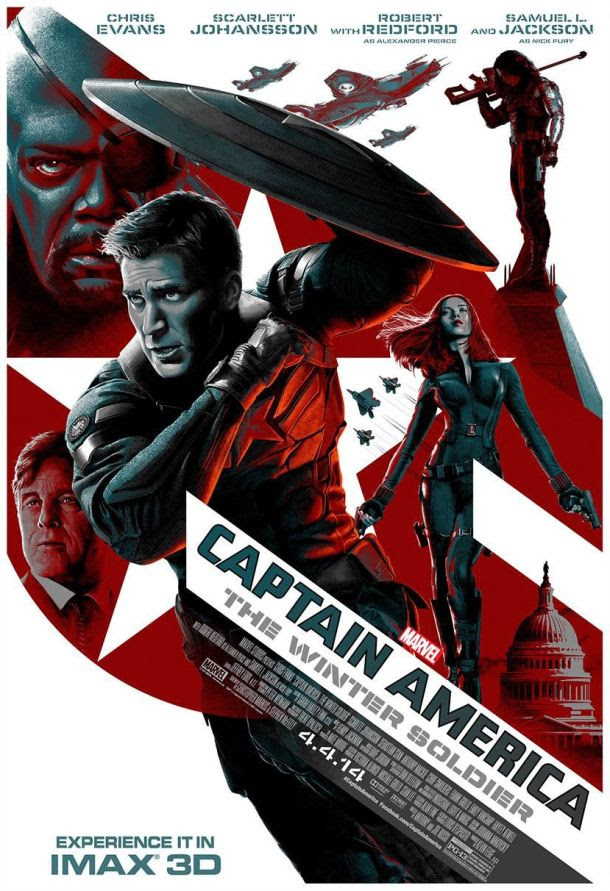 I think agent's of shield fans will feel rewarded.  Even though only a few characters from the show appear here, fans of the show will feel in the know.  Fans of the show will also be left with questions.  Make no mistake this movie will change the lives of the characters on  agents of shield dramatically.  There are no clear answers as to what will happen to the agents on the show but one thing is very clear watching this movie and that is that Marvel has a plan.  Small seeds were planted in the first Captain America movie and many of those seeds have started bearing fruit.
SPOILERS: What happens to Agents of SHIELD after Cap 2?


Characters to watch out for.  There are some characters you have to watch closely to see who they are.  Among them are Cross bones and Batroc.  Neither is an A list character but they are both introduced as formidable foes of Captain America.

Overall:
GO SEE IT.  You will not be disappointed.

I will have a review of the both end credit scenes.  Yes there are two.  The first one is the major one and I will avoid revealing too much about it here.  I will just say that it leads directly into the Avengers 2 movie.

Related:
Who is the Falcon / Sam Wilson?
SPOILERS - Easter Eggs, Revelations in Cap 2
SPOILERS: What happens to Agents of SHIELD after Cap 2?
Designing MODOK for TV?
Who is the Clairvoyant? HUB
Marvels Agent of Shield speculation HUB
Agents of Shield growing Rogue gallery
Will the Overkill Mind be a villain in Agents of Shield?
Will Ward become Wonderman?
on April 06, 2014