Review of Batgirl #29 Is Silver right is Gotham run by Vampires? 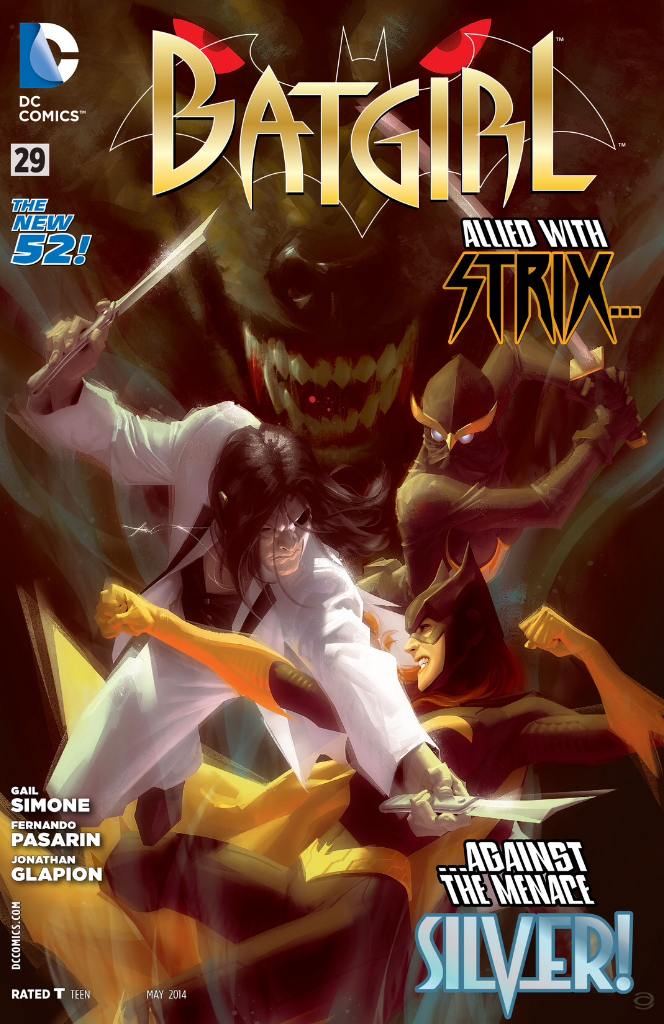 Spoilers Spoilers and then Some Spoilers

This book finishes the short 2 comic story of Silver.  My only major complaint about this story is that it is too short.  I feel like the secret of Silver could have been unearthed slower and we could have had a third issue in this story arc.  I don't think Gail realized how rad of a character she created when she wrote this story.  He is rad Gail bring him back for a second helping of vampires soon!

The story begins with something weird.  Lets face it Silver is a pretty weird guy.  The cops have Silver and his assistant Miss Targa pinned down along with Batgirl and Strix.  Silver first threatens to slit his throat, then cuts it spraying blood everywhere, then does a huge back flip into his car.  He then flips a switch turning on machine guns that spray bullets at the poor Gotham PD.  Both groups take the chance to escape but not before Silver lets slip he has the kidnapped girl that Batgirl is looking for.
Why does he slit his own throat?  It seems like it was just a way to distract and horrify the police.  It is weird, but once again Silver is pretty freaking weird.


The girls hunt down Silver at his mansion where the final battle ensues.  After the battle a major twist that will leave you saying WOW happens.  We also learn more about the tricks up Silver's sleeve.  There is also an appearance at the end by Andrew Bennet the Lord of Vampires who you can expect to meet up with Silver again.

All in all, another very solid book that I would definitely ADD TO THE STACK.

Final Verdict:
ADD TO THE STACK