FROM THE VAULT - Nova 19 - First appearance of Blackout 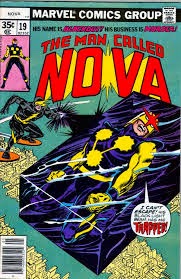 I was organizing some comics and I randomly came across this Nova 13.  This is not a very valuable comic you can likely find a descent copy of it for around $10 on Ebay.  It does however have on interesting aspect it is the first appearance of the villain Blackout!!!!!

That is right the first appearance, first origin story and first super powered battle of Blackout is right here!!!!!!!!!!!

Likely you are saying "Who on Earth is Blackout?"


You will be forgiven for not knowing who Blackout is.  He is a fairly obscure villain who has made mostly cameo background appearances over the past decade.  Despite his obscurity Blackout is a powerful villain capable of single-handedly defeating the Avengers.  The character is about to get some serious airtime on Agent's of SHIELD.  Apparently, he will be hunting down the cellist love interest of Caulson in the episode "The Only Light in the Darkness".  Keep in mind that cellist has now been mentioned in multiple movies and episodes of Agents of SHIELD so finally meeting her is a fairly big deal.  In the Episode "Providence" we see Blackout escape the fridge after Ward and Garrett breakout the villains from the facility.  Garrett tells Blackout to follow his dreams.


Summary of Nova 13
Richard Rider is a young teenage, coward with powers of Nova.  He is flying to school when he randomly runs into Blackout.  Blackout almost immediately kicks his butt.  Blackout is paranoid that Nova was sent to stop him from his "goals."  While, this version of Nova is kind of a wuss he still has the powers of Nova a fairly powerful Superhero.  The fact that Blackout can take him down so easily says a lot about his powerlevel and skills.
Blackout uses black light beams to zap, choke and basically full on beat down Rider.  Nova is bullet proof but the freezing black light beams seem to instantly incapacitate Nova.
Blackout is primarily focused on getting revenge on his former partner/boss Croit, who is a sceintist that specializes in black energy.  Blacklight believes that Croit coerced him into being experimented on which filled him full of the energy of a blackstar.  For some reason Blackout requires a stabilizer unit that holds his atoms together that Croit has in his lab. He thinks that Croit will extort him further if he continues to hold the stabilizer.   The Stabilizer helps keep him together in this dimension and is thus a critical part of him staying alive.
Blackout's goal when he runs into Nova is to hunt down Croit and acquire the Stabilizer. 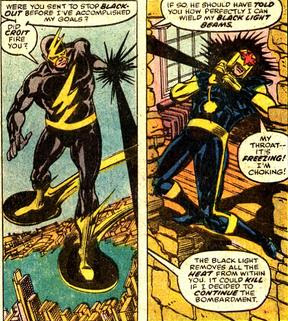 Nova pretty much gets his butt kicked and is nearly killed by Blackout.  The only thing that saves Richard Rider is that Blackout is in a hurry. He really wants that Stabilizer.  He leaves Rider in a cube of black energy in which Nova will eventually suffocate.  However, left alone Rider manages to wiggle out from the cube. 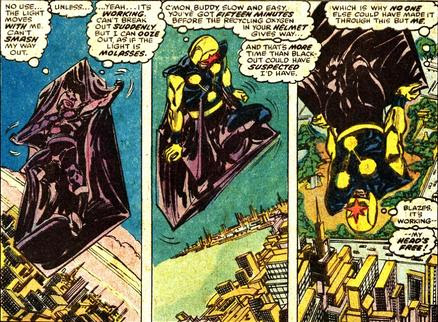 In the end of the book Blackout kills Croit by pushing him into the dark dimension from where he gains his powers.  He then takes the stabilizer unit that he wanted.

The Future of Blackout

Later on we will learn that this is not true that he is in fact crazy and Croit really wanted to cure him.  Apparently, Blackout is some how imbued with a Darkforce that is nearly unlimited and it makes him nuts.  The suit he wears was developed by Croit and allows the Blackout to control the Black force eminating from his body.
Later on Blackout will be beaten by Nova but then return as a pawn of Baron Zemo and Moondragon.  He is basically mind controlled by them and begins to force the Avengers mansion into a different dimension.  Lucky for the Avengers they are able to convince them that his actions are wrong and he turns on Zemo.   He will seemingly die.

A character that looks like Blackout will return and show up in cameos in the storyline the Seige.  It is unclear who this Blackout is.


I think the character has some potential and am excited to see him on TV who knows maybe if his television version is successful we will see more of him in the comics.

FROM THE VAULT -Where Monsters Dwell #6 - 2nd Appearance of Groot
Review of Captain America 2
Has Agents of Shield introduced SWORD?
Designing MODOK for TV?
Marvels Agent of Shield speculation HUB
Agents of Shield growing Rogue gallery
Will the Overkill Mind be a villain in Agents of Shield?
Will Ward become Wonderman?
on September 23, 2016