Evolution of Deathlok
Michael Peterson who seems to be primarily based on the Michael Collins version of Deathlok is slowly evolving into the character.  I like this approach as each episode he picks up a new toy.  Also the origin of the Collins Deathlok was pretty weird in that it involved his brain being moved into the body of the prior Deathlok Luther Manning.  That was weird.  I enjoy this way of building the character and slowly changing him into a super cyborg much better.

I also can't recall any character/show that has done this where a character evolves over the season quite like this.

Version 1:  Peterson is an unnamed hero with mysterious powers of strength and durability.  We learn he has been experimented on by a mysterious group called Centipede.  The serum in his system is unstable and will lead him to eventually explode similar to the Extremis victims in Iron Man 3.  The serum is stabilized though by Caulson's new SHIELD team.  The serum was very likely based on Extremis.


Version 2:
Peterson is a centipede soldier.  He has no cyborg parts but still has super strength.  He is training with SHIELD and even compares his workouts to those of Captain America.
Version 3:
Peterson is blown up on a bridge and is reawakened.  His legs are gone.  His eye has been replaced with a cyborg eye.  Potentially, other parts in his skull and body have been plated in metal under his skin. This is moment where I first saw a strong Deathlok resemblance.  Peterson has the burns on his face and robotic eye.  This eye gives him orders from the Clairvoyant.  His situation of being controlled by an evil group is also similar to the Michael Peterson Deathlok.

Version 4:
Michael Peterson shows up facing Shield again in my favorite episode TRACKS.  In this episode he is given a cybernetic leg that has a codename of Deathlok on it.  He then kills a slew of agents from Cybertek for failing the Clairvoyant.


Version 4:
The beginning of the End Episode -Peterson / Deathlok now has a suit of metal.  He seems almost fully bullet proof.  He is shot in the head at one point and the bullet ricochets off what appears to be metal shielding beneath his skin in his skull.  It is hard to say how long that metal has been there.  Also he is given a blaster that can shoot rockets that attaches to his right arm.  His eye glows red and can be seen using an x-ray like view to see through walls.  He is also able to jump through a ceiling of an apartment and in another scene make a graceful landing after a large fall without difficultly any difficulty.
Skye looks at Peterson through an X-ray like view which shows vast amounts of metal parts and armor beneath his skin.
This may be the final version of Deathlok.  I almost doubt that though.  The show seems to be having fun adding to him episode by episode.


Deathlok Version 5:
Version 5 appears in Season 2 of Agents of SHIELD when Peterson returns to help Coulson.
He has said to have various upgrades that include an EMP like missile. 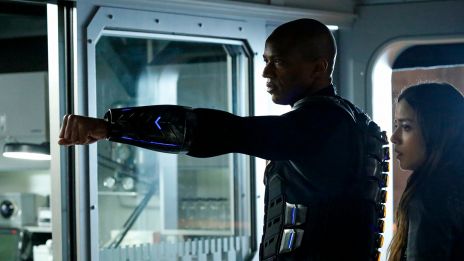