In the Walking Dead there have been two primary Big Bad Characters that Rick Grimes has had to face.  The first is the Governor who is now officially dead on the show, and the second one is Negan.
Sure, there are marauders, there are zombies, but nothing quite amps up the danger level like one of these two.  When they show up, major characters die, and chaos ensues.  Actor Jeffrey Dean Morgan plays Negan on the Walking Dead TV series.

There is a new Negan Graphic Novel coming out in 2017 called Walking Dead: Here's Negan.

Unedited Negan introduction clip on the Show:
Negan made his introduction of season 6 finale but in the official version he did not cuss.  There is an unedited version of the scene that has become very popular online it features Negan using his normal vernacular of Fbombs and seems to be more inline with his comic portrayal. 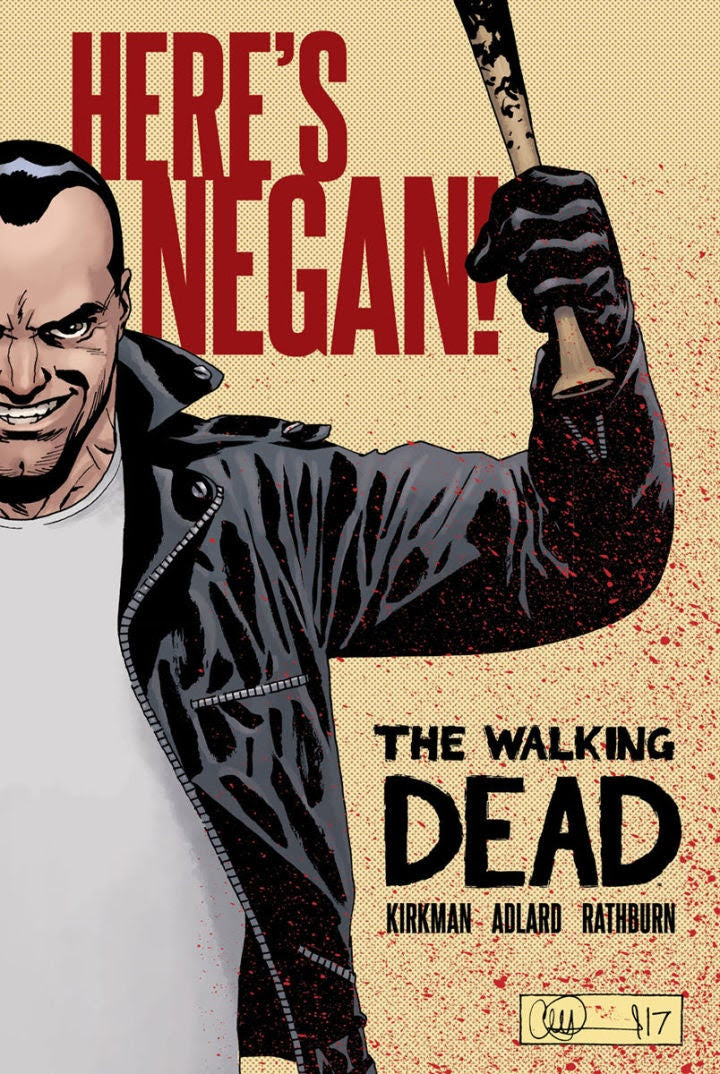 There is a new Negan Graphic Novel coming out in 2017 called Walking Dead: Here's Negan.
Here's Negan will focus on the life of Negan before Walking Dead 100.  It will show how his wife died and how he came to be the megolomaniacal leader of the Saviors.

Here's Negan will be released in a Graphic Novel Format will initially be released as a hardcover with a price of $19.99.  It will come out in comic shops on Oct 4 and book stores on Oct 10. 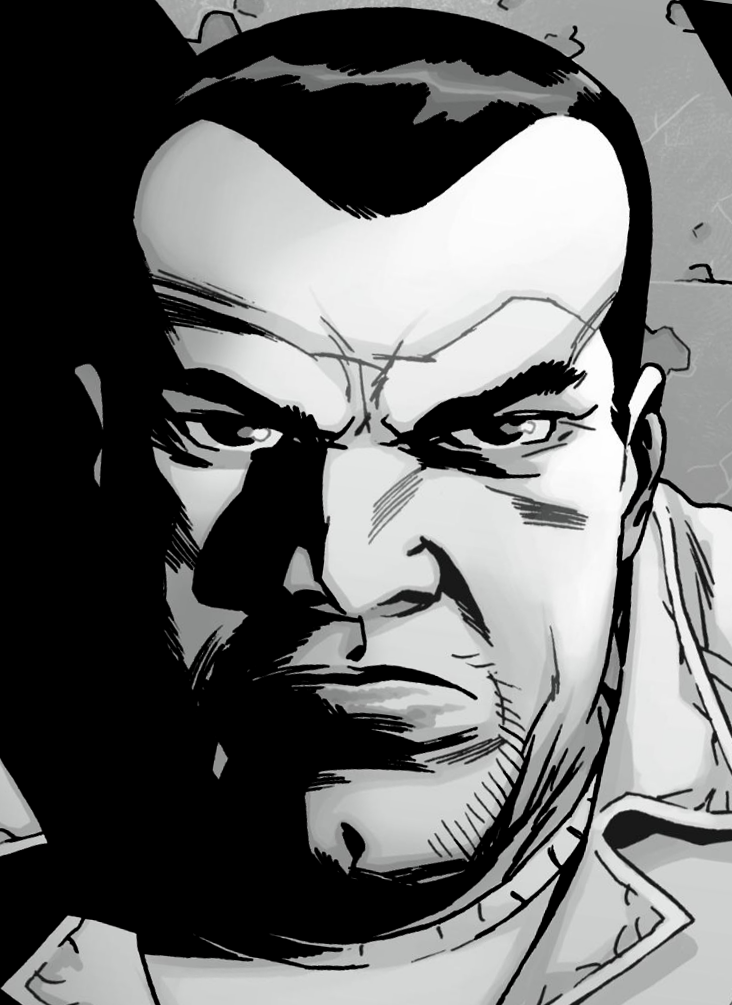 Negan is the leader of a group called the Saviors. Nothing is known about him pre-apocalypse.  His group is basically a giant extortion / protection scheme.  The Saviors go to communities and say give us 50% of your resources for our Zombie Protection Services or we will kill you.  This is what Negan describes as the New World Order.

Negan is brutal and kills both enemies and his own men left and right.  He wields a baseball bat wrapped in barbwire that he named Lucille.  Lucille seems to be part of his psychosis as he talks to the bat like confidant. Negan is extremely violent a typical ritualized punishment for the Saviors is for Negan to burn/melt peoples faces using a scorching Iron.  Despite his sadism, Negan has no tolerance for sexual violence and in one comic kills a Savior for attempting to rape Holly a prisoner.  He is inconsistent on this as he does threaten numerous characters with rape (Mostly males) at other times.

Negan comes across as a bit of a meat head but is very strategic and intelligent.  His meat head, cursing attitude seems to be a bit of front as it camouflages how intelligent he really is.   He is not as cunning as the Governor but he makes up for it with a larger better armed and trained force.  He is also far more brutal.   Negan physically may be one of the most imposing characters introduced in the Walking Dead books, he seems to have no problem beating or killing any other character.

Negan also kills some main characters.  In Walking Dead #100 Negan introduces himself by killing one of the members of the Alexandria community, the person he ends up picking is...


Do you really want to know?

Glenn.  That is right Glenn gets it.  One of the shows most beloved characters is taken away brutally.  Against the loud protestations of Maggie the group helplessly watches as Glenn is beaten to death by Negan.

Rick and crew are of course not very happy with Negan and quickly a very large war ensues.   Rick learned some tricks from his battles with the Governor but Negan is anything but a push over.  A brutal game of chess ensues that envelopes the story.

In the end Rick and collected network of communities defeat and capture Negan.  The remaining parts of his network are added into Rick's network.

Negan is now in a cell as the lone prisoner.   He is treated fairly and in one issue Rick even invites newcomers to the community visit him.

When Will Negan show up?

Actor Jeffrey Dean Morgan has been hired to play Negan.  Morgan played the Comedian in Watchmen.  It is said he will make his first appearance in the Season 6 Finale.  My guess is that this appearance will be marked with the death of a major character.

In The Comics:
He shows up in the pivotal comic Walking Dead #100.  The Governor died in #48 so there is a large gap between these two in the comics.  It is hard to say what the show will do as there could be multiple seasons between the Governor and Negan or the show could straight in for the kill.  My guess is that a lot of the characters will live through their current predicament and will feel safe for a moment...then when nobody is ready for it the Saviors will show up.  It will be like a big Red Wedding style event and the viewers will be saying goodbye to many a character.

Entertainment Weekly asked Kirkman when Negan would show up he responded

“Well, there was a lot of breathing room in the comics between them. Whether or not we have the same amount of breathing room, or if we do cut that down a little bit and bring him into the show a little early remains to be seen. But I definitely do think there needs to be some kind of space from a Governor into a Negan. You have to have something of a break in there. So I wouldn’t expect him to be showing up — definitely not in season 4. I don’t know. I wouldn’t expect it too soon. But we are all very excited about the prospect of bringing that guy into the show. The plan is that we will see him eventually.”

Negan is coming.  Somewhere in the walking dead world he is there.  Waiting...with Lucille. 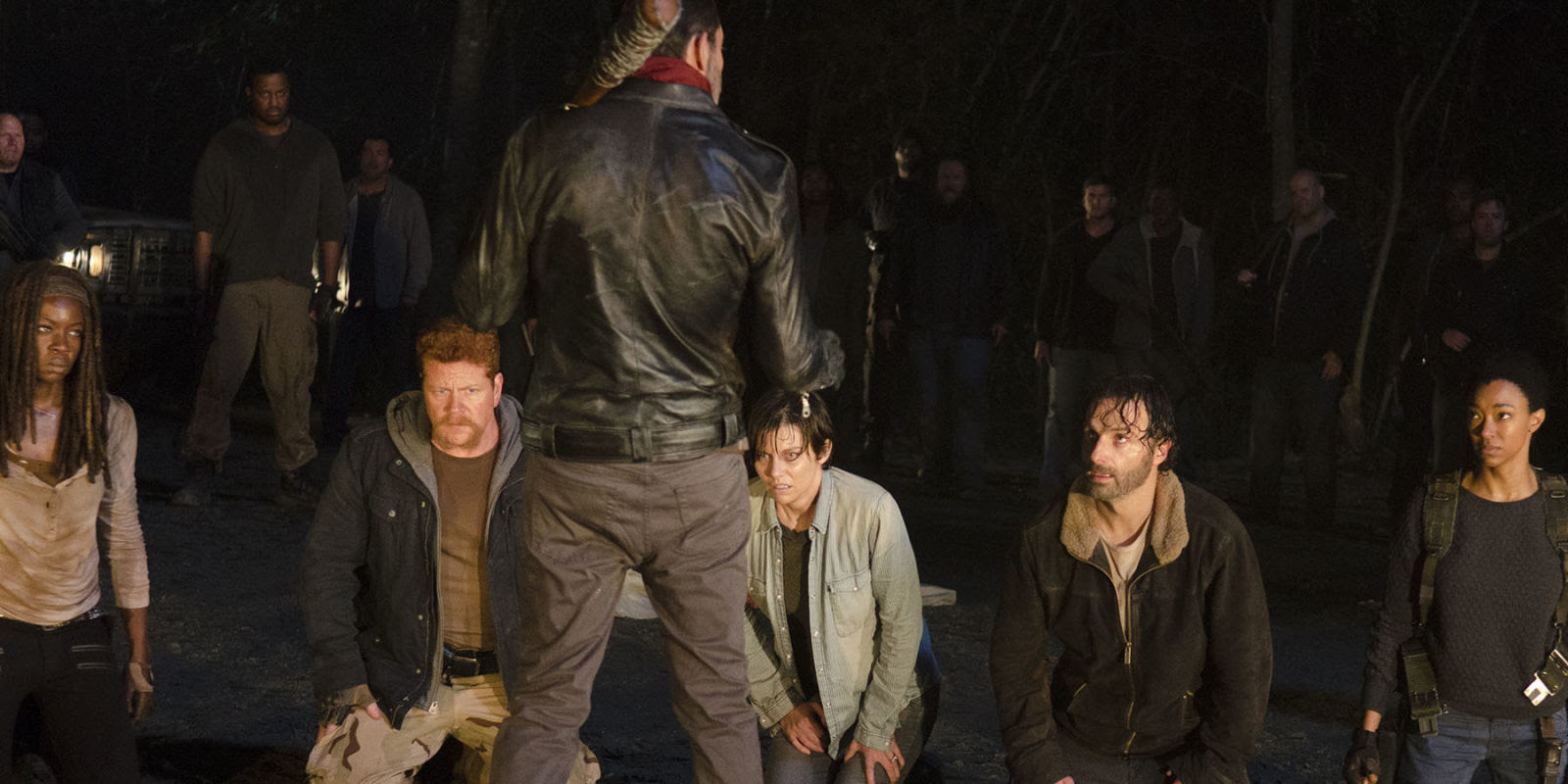 Email ThisBlogThis!Share to TwitterShare to FacebookShare to Pinterest
Labels: Carl, Daryl Dixon, Easter Eggs, Mysteries, Negan, Rick, Saviors, spoilers, The Saviors, Walking Dead, When will Negan Show up, Where is Negan, Who is Negan