Who is Korath the Pursuer?

Who is Korath the Pursuer?

Korath is a character in Marvel comics who has been depicted as both a villain and a hero.  He is a scientist of the militaristic Kree race, who gave himself super powers.  Korath is in the film Guardians of the Galaxy and is played by Djimon Hounsou.

Korath News:
Guardians of the Galaxy Character Hub
Who is Ronan the Accuser
From the Vault: First appearance of Korath
Why is Korath not blue? 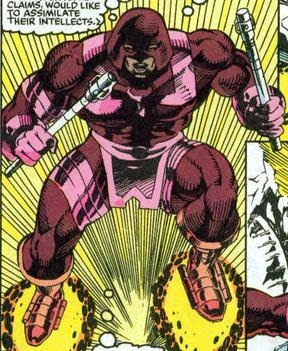 Korath Thak is a member of the Kree aliens.  He is a genius cyber geneticist who is a master at combining machine technology with biology.  Korath is a loyal agent of Supremor aka the Supreme Intelligence and leads what is called the Pursuer project.  The Pursuer project purpose was to create cyber warrior hunters for the Kree militia.  At first he created a range of pursuer robots.  One of these robots battled the Inhumans.

Korath is decommissioned and sent to a fringe world factory.  Unhappy with this he decides to use the pursuer project technology on himself.   The pursuer technology gives Korath superhuman strength and the ability to hunt people by isolating their brain wave patterns.

Korath joins the Kree super-team called Starforce in the Kree Shi'ar wars.  On the team he serves with other well known Kree heroes such as Ronan the Accuser.    Supremor orders Korath to attack the Avengers who are on Hala.  In the battle Korath battles the hero Captain America.  He is present when Deathbird becomes the new leader of the Kree and then Supremor taking over after her.

Korath apparently died when he was assimilated into the Phalanx and became one of their select.  As zombie of the Phalanx he was killed after attempting assassinate Adam Warlock.

Expert in cybernetics, highly trained in the martial arts of the Kree

Equipment:
Cyber armored battle suit - composed of unknown highly durable metals and can fly
Batons- Can stun anyone for a time, have been shown to even work on Eternals

Movie:
Korath is in the film Guardians of the Galaxy and is played by Djimon Hounsou.  He does not appear to be blue, but still looks otherworldly and bad ass.

Toys:
Korath will be joining the rest of the Guardians of the Galaxy as a Lego mini.

Korath will also have his own Hasbro action figure.  Notice he has some similar markings on his armor as does Ronan.  Ronan's appear much similar to the markings on the Blue Alien in AoS.  Perhaps, his markings are special to the Blue Kree: