I feel like this needs a rock and roll intro, maybe some green jelly?

Deathlok is coming on Agents of Shield and I for one am super excited.  I don't need to pay any money, I can sit on my couch and watch the appearance of a superhero character on my television.  I still remember picking up my first Deathlok comicbook.  I was 8 and flying by myself to visit my grandparents.  My mother gave me a few bucks to buy something to entertain myself.  The bookstore at the airport had a package of like 3 comics combined.  All three were Deathlok books.

This was one of them:

Deathlok versus the Punisher.  Who would not love to read that book.  I have no idea how good it was.  I totally forget.

The old school 1970s version was a soldier who is wounded and turned into the ultimate war machine.  I know little else about that version.

I know the 1990s reboot by McDuffie and Wright rather well though.  This Deathlok was an African American pacifist who is brought back to life as a cyborg warrior.  The character is full of internal conflict.  He is a very moral man, who is basically murdered when he finds out he is building a super weapon.  He is then brought back to life as a machine.  This is a of torture all by itself.  He is brought back to life in a form he finds abhorrent and is initially forced to do things he finds intolerable.  He manages to free himself from Corporate control but then is presented with new conflicts.  Does he get vengeance?  If so how?  Mean while Michael desperately wants to go back to his family and son.  However, he is not really alive, feels limited emotion, and of course is a giant walking weapon.  Hard for a giant cyborg to walk home and sit on the couch.  He spends a lot of time trying to find his original body (his brain was moved into the Deathlok body) so he can live a normal life.

Why was it cool?
The 1990s reboot was a fresh and different story in a lot of ways.  First, the story at the time was pretty dark, the main character is living in his worst nightmare.  The dark original Robocop movie was likely a strong reference point, when McDuffie and Wright wrote the story.  The character while living in a dark world is of strong virtue and is very intelligent.  He faces not only constant moral conflict but a conflict on how to make the cyborgnetic body he is in comply to his will.  Really looking back I think Deathlok paved the path for some other darker stories that would become the norm of the 90s.  Spawn has a lot of Deathlok similarities.  I liked Deathlok better though.  Michael Collins was a person you were always rooting for and many dark characters lost that characteristic as time went on.


Here is the first cover of the original character.  Already looking a bit scary, and bad ass.


I also remember that Deathlok appears in the SNES game Maximum Carnage.  He drops down and starts blasting people on both sides of the screen with giant robo cannons.  Does anyone else remember that game?  It was one of the first colored video game cartridges I can remember.  It was also the first Spiderman game that I thought was any good.  I imagine the game introduced many kids to Deathlok for the first time.

Deathlok of course also appeared in the Comics fighting against Carnage's evil forces with Spidey.  I really need to reread these books.  At the time I thought it was awesome.  This was before Marvel/DC started doing a massive event every other month.  This was back when having a large event was still pretty special.  That said I have sinking feeling that Maximum Carnage did not age well.  I will re-read them and let you know.  Here is cover with Deathlok throwing down against Demogoblin. 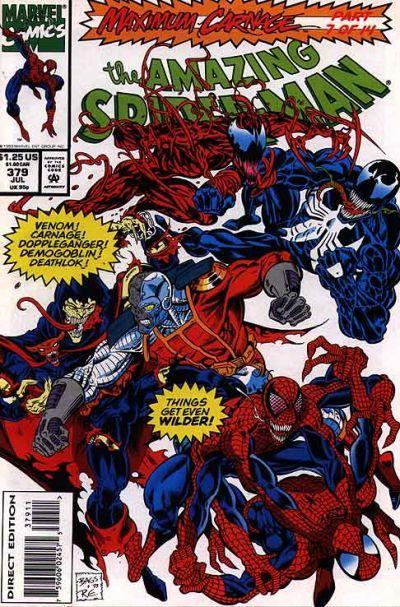 
Another more recent use of the Deathlok character was in Uncanny Xforce.  X-Force encounters a future version of the planet that is controlled by Deathloks.  All of  the superheroes are part of the Deathlok program.  They are used as a brutal peace keeping force.  This story was pretty bad ass and I would highly recommend picking it up on Ebay if you can find it.

Someone made this Custom Deathlok Lego mini Looks pretty sweet. 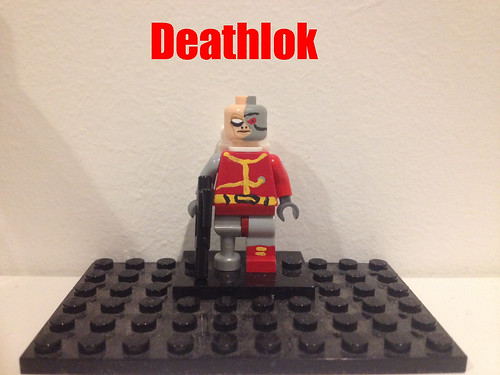