The Clairvoyant is MODOK

Related:
For more Agents of Shield Mysteries!
Other Clairvoyant Options
What would MODOK look like on TV?

Spoilers  I think I need to say that a few times Spoilers Spoilers.

Spoilers for Iron Man 3 and Marvel's Agents of Shield up through "The Magical Place" episode.


Who is the Clairvoyant in agents of shield?

Lets review what we know:

I'll add a few my own speculations
Given all of these things I am going to propose that:
The Clairvoyant is Aldrich Killan (Played by Guy Pearce) who some how survived the events of Iron Man 3 due to having been injected with Extremis.  Do to the accident and subsequent mutation he has been altered even further and is now more intelligent.  Vastly more intelligent in fact.  His head has grown, and he is now MODOK.

In short my theory 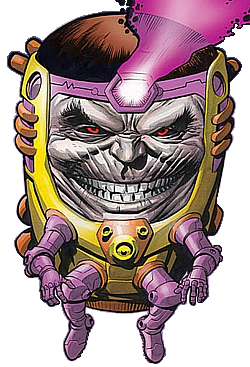 If I am right Guy Pearce would look much less attractive in his new role.  Sorry Pepper.
Other Clairvoyant Options

Who is MODOK.
MODOK is a Marvel Villain mainstay.  He is the off and on leader of AIM.  He looks like a giant floating head, with little arms and legs. The huge size of his head means he has to wear a suite to move around and function.  He is so intelligent he is able to closely predict the future. The villainous MODOK also sports various psionic powers.

Reasons to believe MODOK is the Clairvoyant:


1)      MODOK would fit in nicely with the Centipede group as they could certainly be the AIM organization that created MODOK.
2)      The Centipede henchmen that captured the Scorch character wore suits that looked like AIM suits.
3)      MODOK’s intelligence allows him to border upon precognition.
4)      He is not actually Clairvoyant making Caulson’s claim that they do not exist still accurate.
5)      MODOK is temperamental which could explain why Raina needs Po.  Po could have a special relationship with MODOK that allows him to get close to him without getting killed.
Reasons for the Clairvoyant not to be MODOK
1)      MODOK is a giant floating head.  He may well be outside the bounds of the budget.  He might also just be too far out there period.  Agents of Shield is trying to stay fairly well grounded in reality.
2)      If MODOK were around he would be running the show already, not letting some creepy general be his go between.

ALSO SEE:
For more Agents of Shield Mysteries!
Other Clairvoyant Options
What would MODOK look like on TV?