The Rocket Raccoon Take Over Effect

The Rocket Raccoon Take Over Effect

Related:
Who is Groot?
The wild tale of how Vin Diesel became Groot
Who is Rocket Raccoon?

With the Guardians of the Galaxy movie officially in production it is time to start discussing the obvious, Rocket Raccoon.  Is Marvel/Disney financing a massive budget for a movie about an action hero who is actually a Raccoon that can talk and shoot guns,.....YES.  This is not easy to process the character definitely looks and feels very cartoony.

What also may surprise people is that in truth, Rocket Raccoon will be the main star of the movie.  Sure, the listed main character will be Peter Quill ie Star Lord because he is the only human in the bunch of intergalactic misfits and he helps give the group an earth connection.  Rocket Raccon just takes over though. Where Rocket Raccoon goes he conquers.

As cool as Drax and Groot may look,
As hot as Gamora may be,
You will always be looking at Rocket Raccoon

Don't believe me, look at the pictures below, and try not looking at the Rocket Raccoon. 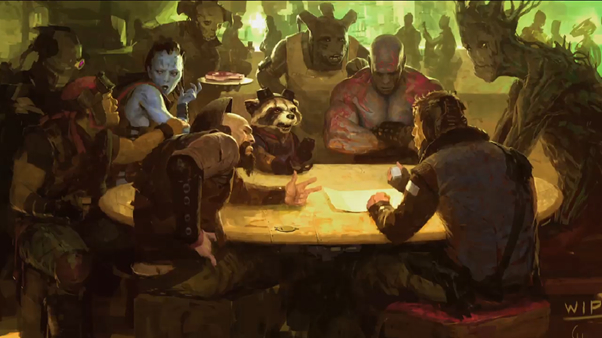 Not easy is it.

Nope you can't look away from the raccoon.  He is too freaking awesome and outlandish at the same time.  It is a clash of a cute against all of these otherwise rough looking characters.  It causes him to stick out.

This sentiment seems to be shared by the writer and director of Guardians of the Galaxy who spoke about his pain staking approach to designing the character during an interview at the London Premier of Iron Man 3:

“I’ve done a lot of studying with real raccoons  and we had real raccoons come in. We’ve done photography with them, I’ve played with raccoons, and fed raccoons, and dealt a lot with real raccoons to get some of the behavior down, because it’s really, really important to me that Rocket Raccoon, who is the heart of the movie, is not a cartoon character, it’s not Bugs Bunny in the middle of The Avengers, it’s a real, little, somewhat mangled beast that’s alone. There’s no one else in the universe quite like him, he’s been created by these guys to be a mean-ass fighting machine.”

Related:
Who is Groot?
The wild tale of how Vin Diesel became Groot
Who is Rocket Raccoon?