Is Centipede and Clairvoyant really Shield

Is Centipede and the Clairvoyant part of Shield?

If you know anything about the upcoming Avengers movie and Captain America's movie you know this is not the case.  Both the Winter Soldier story and the fact that Baron Von Strucker is to be a villain within Avengers lead everyone to believe that Hydra is very much alive and active.

We know that a huge change is going to hit Shield prior to the new movie.    It seems someone else is in charge of Shield instead of Fury.  Perhaps, this new guy Robert Redford is meant to be similar to recent Comics storyline where Norman Osborne takes over shield and renames it HAMMER.   Norman was meant to be more tough and brutal in dealing with threats.  As it turned out though the medicine was worse than the disease.  The New Avengers led by captain America eventually kicked Norman to the curb.

Why do I think something similar is going on.  That some insurgent cell of Sheild is rotten and planning on taking over the whole?  Well lets look at why:

1) Victoria Hand - She has already been introduced in a few episodes of Agents of Shield.  She like many Shield characters is sometimes good, sometimes bad, but generally mostly bad.  She wants to rise up the ranks and is willing to deal with some bad characters to do so.  She is also one of those the Ends ALWAYS justify the means, practical to a fault characters.  The contrast between her leading style and Caulson has already been shown.  When Caulson is kidnapped by Centipede, she swoops into take over the team and his rescue.  Coincidence?  If she had not been played by Agent May, Caulson may not have been found.  Coincidence? Lets look at the character in the Comics.
In the comics Victoria Hand helps Norman Osborn seize control of SHIELD and becomes his right hand Ma....errr...Woman.  She is tasked with amongst other things hunting down those within SHIELD that are still loyal to Nick Fury.  She effectively allows the bad guys to take over SHIELD, then further helps the bad guys cement their power within SHIELD.  Eventually, Norman goes crazy (He always does), and she seemingly becomes a double/ triple, agent of sorts.  Her presence on the show leads me to believe that their is something hiding within SHIELD that is trying to take over the organization.  Most likely it is Hydra elements.

Here is my favorite Victoria  Hand panel.  I doubt we will see her doing this in Agents of Shield but it would be awesome if we did! 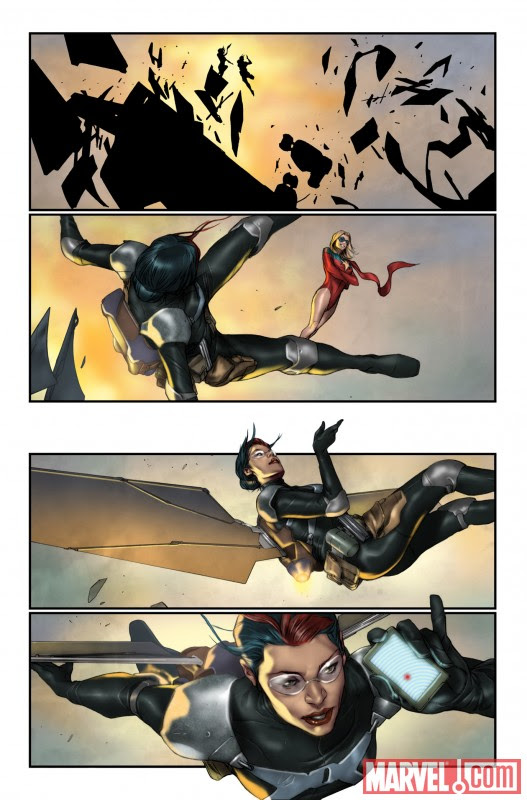 2) Raina - The Girl In The Flower Dress

Raina has been the most consistent of the Agents of Shield villains in its first season.  One interesting thing to note is that when she is captured she seems almost happy.  She is also captured by none other than Victoria Hand.  Is she allied with person arresting her?

3) Extremis
After the events of Iron Man 3 - AIM seems pretty well pummeled to a pulp.  While it is possible that Centipede is a organization trying to piece old AIM back together.  Consider this, who is in a better position to gather up the Extremis data and recreate (improve) it than SHIELD.  Keep in mind it was shown that SHIELD had used old Hydra technology in Avengers when Captain America goes sleuthing around the heli-carrier.  Could Centipede simply be a rogue, or high level Shield organization tasked with rediscoverying Extremis so that it could be used to defend the plant from Aliens?


4) Mike Peterson - When the bridge blows up with Peterson on it you assume he is a goner.  He awakens in a dingy cell with a cybernetic enhanced eye that of course will be used to control him.  Question, the bad guys had left in a helicopter, and only Shield agents were left at the scene.  So how did he end up there, with a centipede style eye surgically added into him?  The only way I see is that if SHIELD agents picked up his body and moved him into that warehouse.  At least some SHIELD agents must working with Centipede.