If your not paying close attention to each episode you may not realize it but agents of shield is bringing out some super villains.   So far most of these baddies have ended up in a facility called the sandbox.

Graviton was created in Agents of Shield Episode 3:
A shield scientist Franklin Hall is kidnapped by the billionaire bad boy Ian Quinn to finish work on a gravity weapon.  Well Franklin turns the tables on everyone and sabotages the weapon and in the process is sucked into the gravity fields of the weapon.  The weapon is put away in storage...but it looks like someone is in there?  Franklin has turned himself into the Marvel universes version of Graviton.

In the comics Graviton is a serious foe that can battle all of the Avengers at once.

In Agents of Shield Episode "Seeds we meet a young genius shield academy student, Donnie Gill who has been manipulated into helping billionaire Ian Quinn (Quinn apparently likes to create super villains as a hobby).  The plan to sell technology to Quinn goes horribly wrong,
At the end of the episode Donnie is shown being able to create ice on glass by touching it with his finger.  Revealing himself to be Blizzard.

Villain 3
-Deathlok
Eventually, he will be a hero but for now Deathlok will likely be a deadly adversary controlled by the Hydra.

Is the Wintersoldier using Deathlok Technology?

We know from comics that Victoria hand can swing toward either the bad guys or the good guys.  She wants power, and thinks she knows what is best for the world.
Based off how she has been portrayed in the episode the HUB, I think it is safe to say that her and Stittswell are in cahoot and up to no good.

She would have access to all of the bad guys above that are currently being held in the sand box.

Update: Victoria Hand was loyal to SHIELD and was killed by Agent Ward so that he could free Garrett (The Clairvoyant) from her Custody.

This villain has not appeared in an episode of AoS but was mentioned.  In the episode TRACKS, Caulson mentions that Blonsky is being held in a cyro cell in Alaska.  Blonsky is the super powerful Abomination.   Abomination is villain who is more powerful than the baseline powers of the hulk.  Abomination's powers do not grow with his anger level like the hulks powers do.

The mentioning of Abomination does mean a few things.  It means the Incredible Hulk movie is at least close to canon.  It also means that the Leader exists and he is indeed a possible contender as the Clairvoyant.

It should also be noted that the Abomination was the focus of the first Marvel short, the consultant.  The Consultant was about Caulson hatching a scheme to ruin the deal that would bring the Abomination into the Avengers initiative.  He basically used Tony Stark (the consultant) to make General Thunderbolt Ross so angry that the deal fell through.

The overkill horn is introduced in the episode the HUB.  A very important episode.  The overkill horn starts out as a very dangerous device that uses sound to detonate weapons at a distance.
However in the comics the horn eventually becomes the Overkill mind.  The Horn joins with nanonites and becomes a sentient.  It can fly, and takes a scientist into hull to provide it with orders.  It is not quite clear what became of the horn so it could certainly return as either a device or as the Overkill Mind.

This may or not be true but certainly John Garrett is a bad guy and certainly he is involved with Centipede.  John Garrett has also been revealed to be part Cyborg like his comic version.  He appears to have metal along his waist.
Who is the Clairvoyant HUB

Villain 6
-  Lorelei
I believe Lorelei is the first Asgardian villain to appear outside of Loki?  She has limited magical powers though less than Loki or her sister the Enchantress.

What was Lorelei's true mission on Earth?
Sif Coming to Earth to find Lorelei

Like the Abomination the Griffin has not yet actually shown up on the show but he has been mentioned.
Garrett tells Ward that the first time he went to the Fridge was to bring in Johny Horton.  Who had lion paws as hands.  This is a reference to the super villain known as Griffin.

Griffin was a thug who was converted into a monster by the Secret Empire.  They wanted him assassinate Beast from the X-men.  The Secret Empire was a "Secret" group of bad guys that was created by Hydra to keep SHIELD busy.  It would be interesting to see if this means that the secret empire also exists in the Marvel Cinematic Universe. 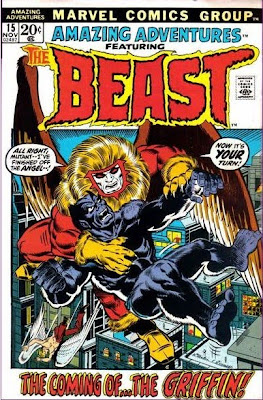 We don't know much about Black Out other than he was freed from the Fridge by Garrett and Ward.  He is going to go after the Cello player love interest of Caulson. 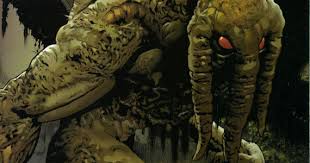 It is unclear if Manthing is a villain or what purpose he will serve.  What is clear is that Marvel has set him up and he exists.
Manthing Easter Eggs in Agents of SHIELD and Ironman 3
Who is Manthing?


RELATED Posts:
Top 10 Villains of Agents of SHIELD
More Agents of Shield Speculation!
Other Clairvoyant Options
Who will Skye become? question HUB
What would MODOK look like on TV?
Manthing Easter Eggs in Agents of SHIELD and Ironman 3